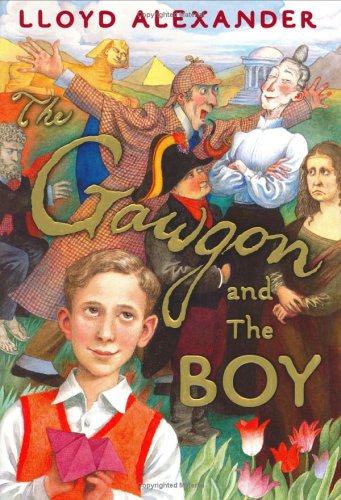 THE GAWGON AND THE BOY

Alexander (; the Prydain Chronicles) here intersperses adventure-filled fantasies with a semi-autobiographical account of growing up in Philadelphia in the late 1920s. When a serious bout with pneumonia leaves 11-year-old David too weak to return to school, his older, unconventional "Aunt" Annie steps in as his tutor. David dubs her "The Gawgon" ("The Gorgon," as pronounced in another relative's idiosyncratic accent), but her exuberant approach to history, literature and life itself soon has David enthralled—and provides him with ample material for writing and illustrating. Occasional lapses into coyness ("Barnick and Deveraux had been banished to summer camp in the Poconos. Their punishment: to play baseball, swim in lakes, ride horses, and toast marshmallows") are not enough to sink this gently buoyant portrait of the artist as a young man. Alexander's fans will likely find that The Gawgon calls to mind an older incarnation of his feisty heroine Vesper Holly, star of her own quintet of books. Though the duo's romps through history (including encounters with Napoleon and Leonardo Da Vinci) most closely resemble the work for which the author is best known, they pale in comparison to the forthright descriptions of David's eccentric extended clan, his grandmother's boarding house and details of everyday life in the first third of the 20th century. Ages 10-up.