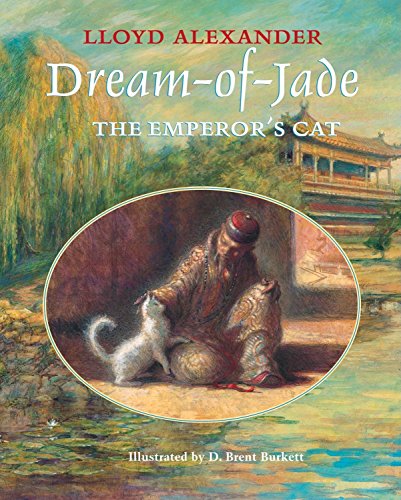 Each of Alexander's (the Prydain Chronicles) five stories explores how the relationship between a talking cat, Dream-of-Jade, and Kwan-Yu, Celestial Emperor of China's Middle Kingdom, gradually frees the Emperor from his advisers' bureaucratic stranglehold. Perhaps best suited to newly independent readers, the tales (first published in magazine) range from eight to 11 pages, with a generous helping of illustrations breaking up lengthy chunks of text. The strongest of the stories leads off: "How Dream-of-Jade Looked at the Emperor" describes their initial meeting. Dream-of-Jade, "as curious as she was beautiful, and as determined as she was curious," defies custom, sits on the throne (where she notices loose ceiling tiles) and gazes directly at the Emperor's face. When the Emperor alerts his Chief Minister to this etiquette violation, the fellow responds: "Son of Heaven, your observation is highly illuminating. There does, in fact, appear to be a feline creature so situated and performing the ocular activity you have so graciously called to my unworthy attention." The Chief Minister calls for the cat's execution, but Dream-of-Jade leaps onto the Emperor just as the ceiling tiles fall, saving his life and winning his friendship. Thanks to Dream-of-Jade's valuable life lessons, the Emperor comes to discern when his counselors proffer officious, nonsensical guidance. Burkett ( ) humorously illustrates the havoc the feline's advice wreaks (in one scene the Emperor, chasing a piece of string, upsets the entire kitchen) and captures the growing love between the wise cat and the perceptive Emperor who comes to appreciate her honesty. Ages 7-up.