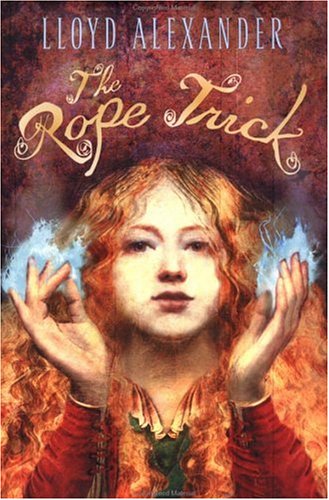 The undercurrent of melancholy running beneath (and occasionally bursting to the surface of) this fanciful tale makes it as memorable as Alexander's previous Chronicles of Prydain and Westmark trilogy. After the death of her bitter and unkind father, Lidi continues on with the family trade, roaming the towns of Campania (a fictional land resembling pre-unification Italy) performing magic tricks and sleight-of-hand. The author once again proves his gift for summing up a situation in a few potent phrases. For instance, when Lidi first began to outperform her father, he tried to hit her and tell her she's "best at nothing"; the narrative follows with, "She could dodge the blows but not the words." Lidi and her loyal canvasmaster, Jericho, are joined by Daniella, an orphan with a knack for predicting the future, and Julian, a handsome rebel with a price on his head. As her troupe travels, Lidi pursues her dream of learning the rope trick—the most legendary trick of all—from Ferramondo, an enigmatic magician who is described differently by each person who has met him. Meanwhile, as a delicately etched romance takes shape between Lidi and Julian, sinister forces conspire to thwart the happiness of the stalwart performers. Alexander deftly entwines many strands—bitter, funny and sweet. Even as the outsize characterizations and rollicking adventure amuse, the compassionate vision of life's possibilities is likely to bring a lump to the throat. Ages 8-12.