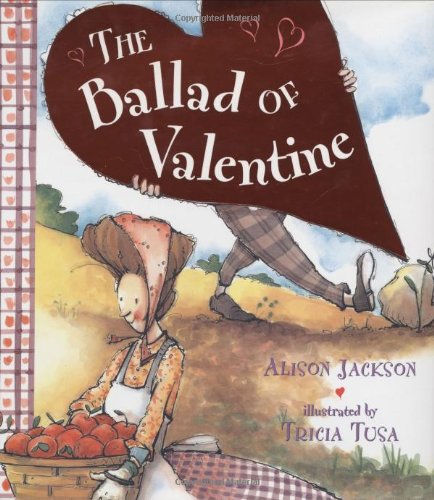 THE BALLAD OF VALENTINE

"In a cabin, in a canyon,/ Near a mountain laced with pine,/ Lived a girl who was my sweetheart,/ and her name was Valentine," begins Jackson's () clever adaptation of the familiar folksong "Clementine." Tusa's () sure black line and watercolors add another layer of hilarity to this story-in-song of a resourceful mountain lady and her harried suitor who, through a string of missteps, keep failing to connect. After giving his love letters "to a mailman/ To deliver, rain or shine," Valentine's beau tries more imaginative means, including a homing pigeon that gets sidetracked in Madagascar, and skywriting ("But the wind erased three letters,/ And you're now my -al-n-ine"). Meanwhile, the paintings show the industrious, pointy-nosed object of his affection just missing each message as she tends to frontier chores with a brisk cheeriness. The artist reassuringly establishes from the outset that the feeling is mutual: he keeps a picture of Valentine on his piano; she keeps a cameo of him on her bureau. Attentive readers will detect that the sweethearts' homes are not so far apart, and as the lovestruck fellow misses his target repeatedly, Valentine begins a holiday token of her own affection. It's finally Valentine's personal presentation of her gift that leads to the pair's rendezvous. This inspired treatment of an age-old tale communicates plenty about love. Ages 4-8.