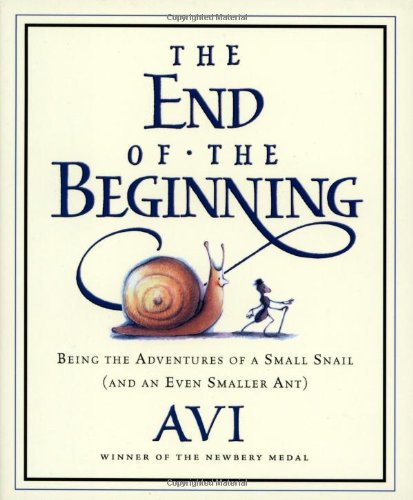 THE END OF THE BEGINNING: Being the Adventures of a Small Snail (And an Even Smaller Ant)

Newbery medalist Avi ( ) returns to animal fantasy with this gently humorous tale about two travelers in search of excitement, an earlier version of which appeared as a beginning reader ( , 1972). Avon the snail wants adventures like the characters he reads about in books. He sets aside caution and heads out, immediately meeting Edward, a cocksure ant who has (mostly wrong) answers for all of Avon's worries. Avi's droll wit spices the rather quiet journey, as when Edward goes to formally greet his new friend: "When he realized Avon did not have hands, he shook one of his own. 'Pleased to meet you,' he said." Careful listeners will figure out the travelers' trip consists of the length of a long branch and will enjoy being in the know when Avon and Edward clearly aren't. What qualifies as excitement for this pair may not raise goose bumps on anybody else's skin—they mistake a mouse for a dragon ("good dragons disguise themselves as nice creatures, and bad dragons as nasty ones," Ant explains), and must "battle" an oncoming snail in order to pass one another on the narrow branch. But the bite-size chapters and the clever repartée make this a charming tale, and the occasional, slightly anthropomorphized pencil illustrations show Avon and Edward to be the friendliest of creatures. All ages.