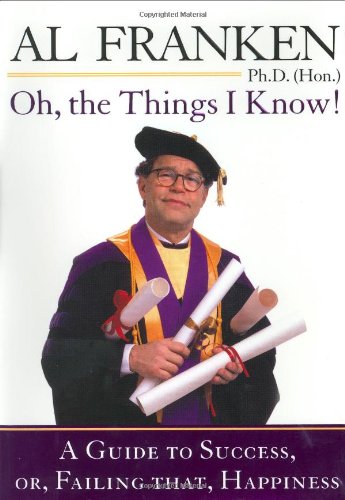 OH, THE THINGS I KNOW! A Guide to Success, or, Failing That, Happiness

Writing with the self-satirizing smirk that became his specialty on , Franken now takes on the advice-book genre. Written as a series of self-aggrandizing bromides, his book—with its title's nod to Dr. Seuss's perennial bestseller—hopscotches from one barely considered subject to another, dispensing hilariously useless advice on things like personal health, real estate and passively aggressively insulting your spouse by letting your appearance go to seed. Recent high school—and maybe even some college—graduates (his target audience) will alternately laugh and roll their eyes at comments like "You're never too old to learn. Unless you have Alzheimer's, in which case you're never too old to unlearn" and "Religion is like a fire extinguisher. You never know when you're going to need it. So it's best to have one handy." There's little here that qualifies as great comedy—the chuckles it provokes will probably be forgotten in an hour or so, which, incidentally, is about how long it takes to read the book—but it's refreshing to see Franken turning his sights to something besides the too-obvious political satire he's been promoting of late.