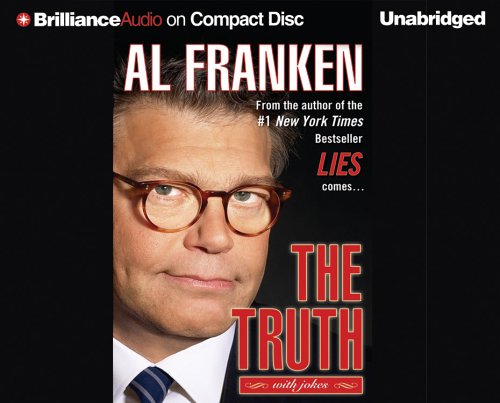 The Truth (with jokes)

Franken and his research team return to what they do best: detailing allegations and accusations being spread by right-wing pundits and then debunking them point-by-point. While numerous tomes have taken on the administration's creative definition of "facts," few have the massive readership of satirist Franken or his wickedly sly sense of humor. In many ways, the unabridged audio is superior to the bound book because listeners can enjoy Franken's deadpan comedic delivery. Another audio bonus is that rather than Franken reading the text he's about to redress, he provides the actual soundclips so listeners can hear George W. stumble over his words, Sean Hannity and Rush Limbaugh bluster and Zell Miller contradict himself. Franken is such an uncanny mimic that listeners will find it hard to tell which Karl Rove and Dick Cheney sound bites are real and which are Franken's dead-on impersonations. Listeners will find Franken's directness refreshing (he calls Bush an "utterly shameless liar" and says his administration is "fixing the intelligence and facts around the policy."). The penultimate chapter is Franken's stirring call to arms to "throw these guys out in 2006." This is essential listening for those who want ammunition to fight to preserve their human rights.