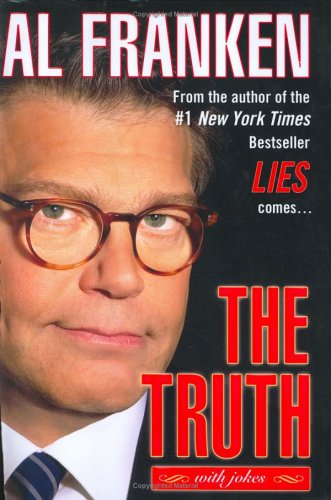 The Truth (with jokes)

Franken is George W. Bush's worst nightmare: a savvy liberal political satirist and Harvard fellow with a massive readership. Franken and his tireless team of fact-checkers are able to spread to people who might never pick up books by Eric Alterman ( ), David Brock ( ), Joe Conason ( ), Ron Suskind ( ) or Richard A. Clarke ( ). Debunking the lies and allegations spread by "the right-wing blogosphere, radiosphere and asshole-on-TV-osphere," Franken details how the Bush team won the 2004 election through "smears, fears and queers." Believing that the Bush regime's plan was to "divide Americans to conquer them," Franken has created a reference manual that refutes propaganda issued by an administration he believes "shouldn't be running a small town hardware store much less the world's only remaining superpower." While Franken writes with a razor-sharp wit, his intention is deadly serious: to expose how hypocrisy, bigotry, ineptitude, unchecked corruption and partisan politics have resulted in war, debt and a divided nation. Franken considers the political motives behind the Terri Schiavo case and the distortions behind Bush's campaign to privatize Social Security. Along the way he takes on the Swiftboaters, Bush's fake "mandate," Tom DeLay, Iraq and Karl Rove. Like Jon Stewart's , Franken has the ability to entertain, illuminate and motivate.