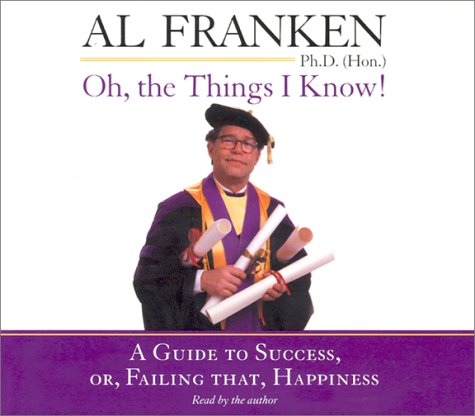 OH, THE THINGS I KNOW!: A Guide to Success, or, Failing That, Happiness

Listeners probably have a good idea going in whether or not they will like this recording. Fans of Franken's nasal voice, astringent wit and unapologetically liberal politics will delight in his irreverent send-up of self-help books and trite commencement speeches. As with humorist David Sedaris, listening to Franken (; ) simply puts a funnier twist on his work. And the production's lone sound effect—using auditorium acoustics as Franken presents two examples of bad graduation speeches he has given—is perfectly employed and makes for material as funny as any of Franken's skits. Franken has phenomenal comic timing, which he displays on such useful chapters as "Oh, the Weight You Will Gain!" and "Oh, the Mistakes You Will Keep Repeating!" While his voice might wear on some people, many others will be gasping with laughter.