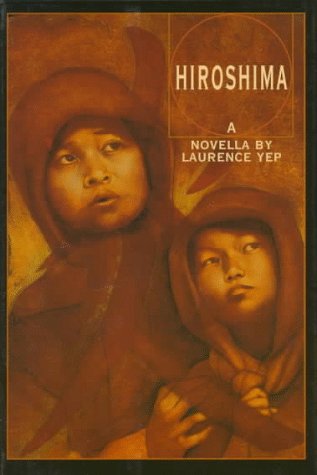 Yep's account of the bombing of Hiroshima and its devastating aftermath is at once chilling and searing, hushed and thundering. Within a factual framework, the author sets the fictional story of a girl named Sachi, allegedly a composite of several young residents of the bombed city. On the morning of August 6, 1945, 12-year-old Sachi and her classmates pull on their pitifully inadequate air-raid hoods when an alarm sounds, signifying the approach of an American bomber. They and others feel, ironically, a deep sense of relief when the aircraft passes by-the plane's mission, in fact, is to scout out the weather over Hiroshima; if there are clouds, the Enola Gay will be directed to drop its atom bomb on another city. But a single gap opens in the clouds directly over the target site, and ""the sunlight pours through the hole on to the city."" This is the last bit of brightness in Yep's story, which with haunting simplicity describes the actual bombing: ""There is a blinding light like a sun. There is a boom like a giant drum. There is a terrible wind. Houses collapse like boxes. Windows break everywhere. Broken glass swirls like angry insects."" Though Yep's spare, deliberate description of the bomb's consequences delivers a brutal emotional punch-and though it is on the whole extremely well suited to the target audience-his novella has some jarring stylistic elements. Broken into brief chapters (""The Bomb,"" ""The City,"" ""The Attack,"" ""Destruction,"" ""Peace?""), the narrative is choppy. The text, for example, makes a hasty chronological jump from the announcement that WWII is over to Sachi's experience as one of 25 ""Hiroshima Maidens,"" who in 1955 traveled to the United States for plastic surgery to correct disfiguring burns. And although expressing an opinion is clearly the novelist's prerogative, it should be noted that the story Yep relays is hardly balanced; witness the two simple sentences about the Japanese bombing of Pearl Harbor, which make no mention of the resulting human casualties: ""Four years before, on December 7, 1941, Japanese planes attacked American ships in Hawaii without warning. Caught by surprise, many ships and planes were wrecked at the naval base, Pearl Harbor."" Yet in what is one of his tale's most haunting moments, Yep interjects the resonant words of an American-the Enola Gay's copilot-who, surveying the destruction just after the bomb has hit Hiroshima, scribbles a note to himself: ""What have we done?"" This powerful chronicle ensures that what was done on that awful day will remain in readers' memories for a very long time. Ages 8-11. (May)
close
Details