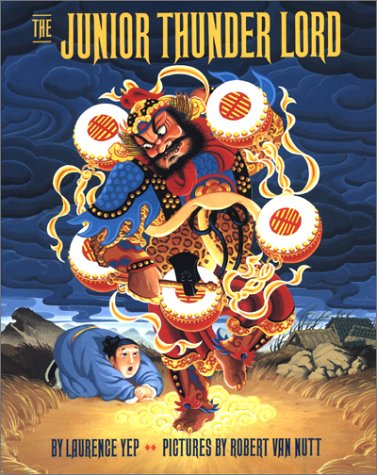 Yep (The Man Who Tricked a Ghost) here gracefully wraps a 17th-century Chinese fable in a zestful style that speaks immediately to readers and vivifies its moral-that ``those at the top should help those at the bottom.'' Merchant Yue learned that lesson as a dull schoolboy; thus, when he must travel to sell his wares during a drought, he takes pity and feeds the ravenous Bear Face, a huge, shambling man whose manner and bearing the natives find disgusting. Bear Face, in turn, later saves Yue's life. When Yue implores Bear Face to return home with him, he astonishes Yue by first revealing his true identity as a Junior Thunder Lord and then summoning the much-needed rain. Van Nutt's dynamic, detailed illustrations telegraph a range of moods; along with establishing interiors of inns and underwater seascapes, they are also capable of soaring into the roiling dragons and storm clouds of Bear Face's skies. The division between heavens and earth reinforces the gulf between Bear Face and Yue-and the moral-making the happy ending doubly satisfying. Ages 5-9. (Oct.)
close
Details