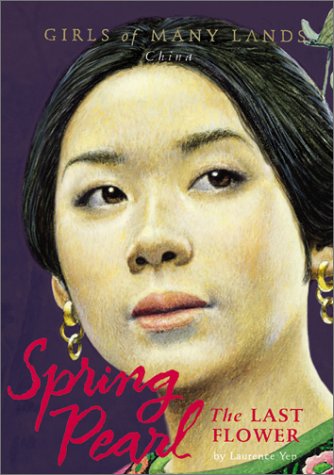 Part of the Girls of Many Lands series, this colorful novel introduces the spirited 12-year-old Chou Spring Pearl against the backdrop of Canton, China, during the Opium War of 1857. The recently orphaned girl has been liberally raised by her artist parents—she can read and write and speak English—but now she's a charity case, taken in by Master Sung, a wealthy friend of her father's. Life with Sung's arrogant wife and daughters (who call her "Miss Ratty" after her poor ghetto neighborhood) starts off rocky, but Spring Pearl rises to the challenge through strength of character, gradually earning the respect of the entire household. When Master Sung is arrested and imprisoned, Spring Pearl's courage and ingenuity help bring the family safely through the ordeal. Spring Pearl has a bit of both Cinderella (she's assigned menial chores at first) and Mary Lenox (she restores the Sungs' neglected garden), but she emerges a fully realized character. Offering his typically lively dialogue and strong supporting cast, Yep () also integrates period detail into a well-honed plot. A "Then and Now" afterword draws on Yep's story to contrast conditions facing girls in 19th-century China with those today. Ages 9-12.