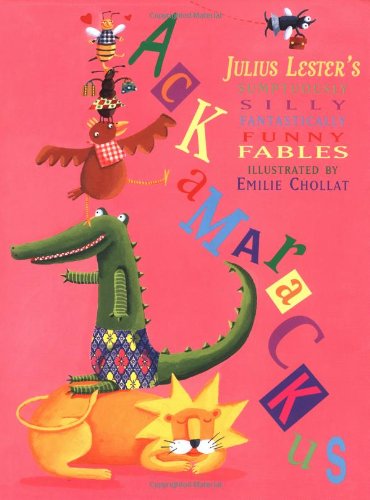 Puns and alliteration abound in Lester's (; ) roundup of six zany, zippy tales. The author introduces some cockeyed characters, among them a bee who falls in love with a balalaika-playing girl bee and learns to play the bongos after he loses his buzz ("A bee without a buzz would be a used-to-be bee who was now a been"), a lion whose wives find a way to cash in on his laziness and an alligator who beats the Florida heat by moving to Vermont. An inventive counterpoint to Aesop's approach, Lester's fables conclude with a pair of morals—some entirely absurd, some with a tinge of truth—listed under the heading, "Which proves two things" (the bee tale, for instance, concludes with: "1. Always be all that you can bee./ 2. Why buzz when you can balalaika?"). French artist Chollat reinforces the farce and folly of the narrative in her boldly hued acrylics and collage illustrations. For "The Flies Learn to Fly," she pictures the students at fly school dressed in gingham, polka-dot and plaid fabric swatches; cutout letters function as the equivalent of thought balloons. The 's definition of "ackamarackus" appears on the back cover, which reads in part, "A 'tall' story, a hackneyed tale, nonsense, malarkey." Which proves two things: 1. This book is most appropriately titled; and 2. This is Lester at his most preposterous and playful. Ages 4-up. (.)