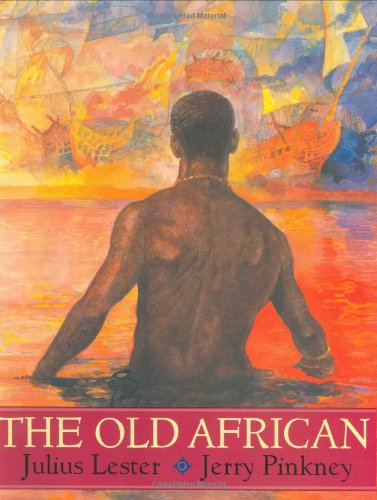 Based on legend, this story by frequent collaborators Lester and Pinkney moves gracefully and affectingly from darkness into light. As the tale opens, a plantation master whips a young slave who has attempted to escape. Yet the slaves witnessing this do not see the blood glistening on the boy's back; instead they see in their minds a picture of water "as blue as freedom." This vision is provided by the Old African, once called Jaja, a wise slave with a unique power to speak to his fellow captives in their minds and "[pull] the pain from the channels of their souls as if it were a worm in the earth." The narrative then returns to the time of Jaja's capture from his African village and the Middle Passage (across the "Water-That-Stretched-Forever") to be sold into slavery. Like Tom Feelings's , author and artist do not spare readers the horrors that occurred. Lester describes the stripping down of captives and liberties taken with the women; in wordless spreads, Pinkney shows Jaja chained to a man who was just fatally shot. On the journey, Jaja's wife throws herself overboard and his mentor is beaten to death. Back in the present, the Old African learns that his master wants him dead, and believes "it is time to go home." Two stunning wordless spreads depict the triumphant, uplifting finale, in which the sage leads the captives along the ocean floor to their homeland. By not shying away from the realities of these characters' daily life, Lester and Pinkney make their victory all the greater. Ages 9-up.