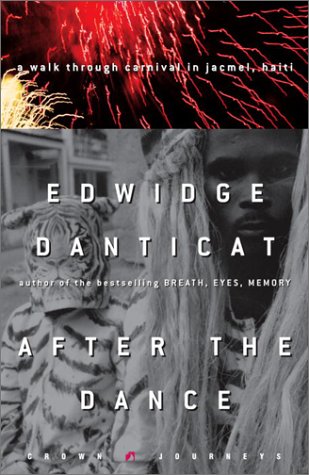 AFTER THE DANCE: A Walk Through Carnival in Haiti

Twenty years after emigrating to America, Danticat () returns to her native Haiti and the coastal village of Jacmel to take part in her first Carnival. But she's not without reservations. As a child she was forbidden to partake in the festivities by her uncle, a Baptist minister with whom she lived before joining her parents in New York at age 12. "People always hurt themselves during carnival, he said, and it was their fault, for gyrating with so much abandon that they would dislocate their hips and shoulders and lose their voices while singing too loudly." Organized in sections that parallel Danticat's perambulations in the week leading up to the event, the author illuminates the political, economic and cultural history of the island nation, introducing Columbus, French colonists and François "Papa Doc" Duvalier, the dictator of Danticat's youth. Throughout, readers meet local artists, farmers and activists who call Jacmel home, including Ovid, a farmer whom Danticat meets having lost her way in an abandoned sugar plantation. Madame Ovid, his wife, crafts paper cones to hold the grilled corn flour she will sell during carnival. It's said that the act of writing leads to a deeper understanding of one's subject, and oneself. As the work reveals in its final pages, for no one is this more true than Danticat, who offers an enlightening look at the country—and Carnival—through the eyes of one of its finest writers.

Land's End: A Walk Through Provincetown