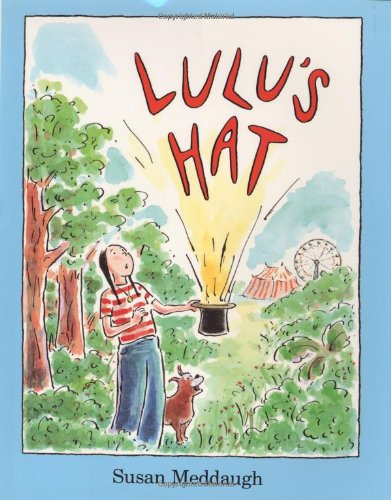 Meddaugh's () illustrated tale of a girl magician offers comic relief for those boy-centered, multi-volume sorcery novels. Per the wizard-book formula, Lulu is 12, ordinary looking but for her strange blue eyes and adopted by a regular family that includes a career magician, Uncle Jerry. "Lulu's parents had often told her how Uncle Jerry had discovered her during a performance in Atlantic City," wearing a sealed locket. One summer, Lulu goes on the road with her uncle's Traveling Magic Show and discovers her knack for hat tricks. Her unpredictable top-hat produces rabbits, "giant cane toads" and a thick-set, Martha-esque dog, "and that was lucky too, because no matter what came out of Lulu's hat, the dog could always round it up." When the dog vanishes into the hat and won't come out, Lulu follows him into Deep Magic Space, where she learns the secret of her original family. In concise chapters and humorous black-and-white drawings, Meddaugh flashes between the parallel universe and the everyday world, where a boy's shenanigans land the magic hat in a pond (Lulu gets caught in a flood) and under a hair dryer ("In Deep Magic Space, a dry hot wind was blowing"). Lulu doesn't have much personality as she goes through the plotted motions, but the suspense develops nicely and the puzzle pieces snap into place for a witty outcome. Ages 6-10.