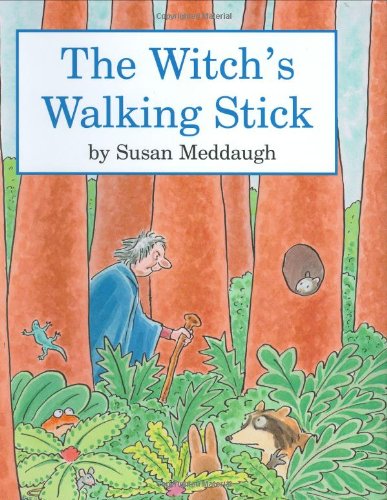 In this comic fairy tale, a Cinderella-esque orphan flees her mean older siblings and happens upon a witch's magic walking stick. The witch typically uses the stick for "turning birds into bats or squirrels into goldfish," and the other creatures' anxious frowns arouse distinct anti-crone sympathies. Fortunately for the local fauna, the stick has "just a bit of magic left" after so many bad deeds. More fortunately still, the witch shakes the stick at a friendly spotted dog, who playfully grabs it and trots away. Meanwhile, elsewhere in the forest, young Margaret has grown tired of sleeping on straw and doing chores for her bossy older siblings. She sneaks away from home just in time to find the stick and engage the pooch in a game of fetch. As in her , Meddaugh delights in humble enchanted accessories, and as in her Martha books, she can't resist a dog rescue. This book offers a bit of both, with Margaret trumping her oppressors, foiling what's left of the witch's magic and acquiring a terrific new pet. Meddaugh's ink-and-watercolor sketches capture the characters' attitudes and enhance the comedy of the writing, as when Margaret silently arches an eyebrow at the audience, preparing to confront her nasty brother. Little guys finish first, and act benevolently, in this good-natured (and good-to-nature) story. Ages 4-8.