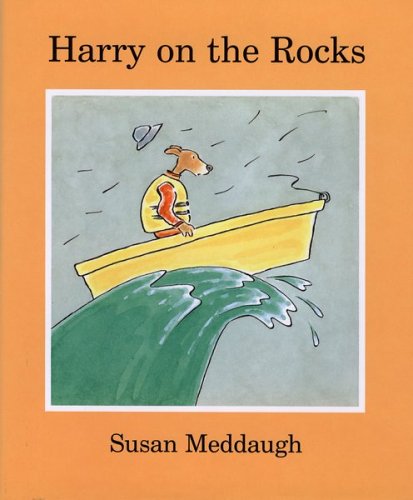 HARRY ON THE ROCKS

With a hapless hound hero shipwrecked on a deserted island, Meddaugh (the Martha series) serves up a scenario that will leave readers anywhere but high and dry. Catching sight of an orange-colored egg, Harry unwittingly helps hatch what he at first thinks is a lizard. A day later, the dog notices that the creature has wings, like a bird: "Perhaps I have discovered a missing link," he says. "I think you are a !" Then Harry has a brainstorm: if he teaches the "bizzard" to fly, it could catch fish for dinner. A series of comical spot illustrations shows the wide-eyed, eager-to-please creature furiously flapping—and falling down. Thanks to a limited palette of greens, grays and oranges and repeated elements (e.g., the bizzard's orange stripes match Harry's orange-striped shirt), Meddaugh achieves a deceptive visual simplicity that complements the unabashedly outlandish elements of the plot. The whimsy reaches its apogee in a wordless double spread: fists clenched, the bizzard unassumingly hurls flames from its mouth, broiling a fish beneath as Harry looks on with a dropped jaw. Realizing at last that his friend is a dragon, Harry is terrified: "Harry dived under his broken boat.... Every so often he would yell: 'Go away!' or 'There's nobody in here!' " Meddaugh's delivery is as droll as ever, and her tale stays on track right through to the clever twist at the end. Ages 4-8.