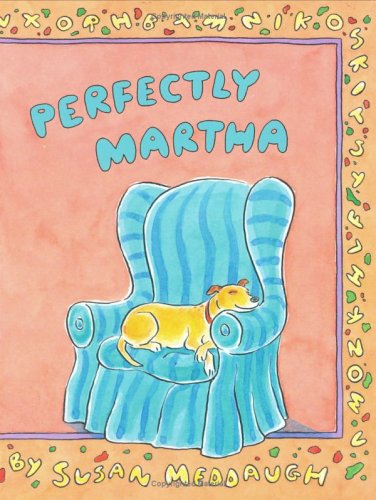 In Meddaugh's sixth Martha episode, the talking dog turns Nancy Drew to foil a crooked dog trainer and his craven accomplice. Per usual, the story begins with an explanation of Martha's unusual talent (her daily ration of alphabet soup gives her the gift of speech). One day, the canine notices that a Daddy Warbucks lookalike named Otis Weaselgraft has opened a "Perfect Pup Institute" (which gives the book its title and lets Meddaugh squeeze some comic mileage out of the PP acronym). The snake-oil salesman stands on the curb, asking dog owners, " 'What do dogs want?'/ Before Martha could answer, the man continued./ 'They want to scatter trash on pickup day, sleep on the furniture, and drink from the toilet.... Your dog... could be better.' " Martha, who grumbles to her (nonverbal) sidekick Skits that "dogs are already perfect," investigates, and learns that Weaselgraft controls pets by implanting a "Robo Rover Brain Blocker" in their collars. Meddaugh's story amounts to a mad scientist yarn, but her discerning cartoons carry the day. In agile ink-and-watercolor illustrations, printed on a white ground like the Curious George books, Meddaugh does for dogs what H.A. Rey does for monkeys. Her happy dogs wiggle and scratch, while Weaselgraft's zombie-like trainees exhibit a bizarre tolerance of squirrels. Whistleblower Martha remains the series star, with balance provided by the goofy Skits and Weaselgraft's pug, Burt, who stays on after the PP Institute skips town. Ages 4-8.