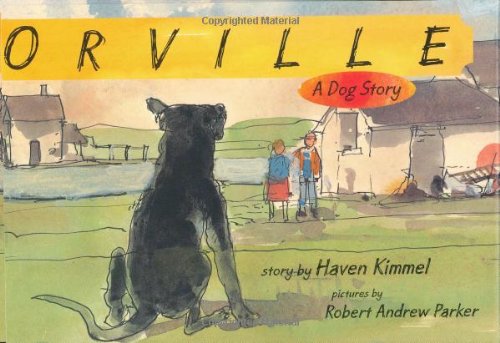 Written from a dog's-eye view, and enlivened by Parker's () pen-and-ink drawings, Kimmel's first picture book adopts a tone that, half-bleak, half-whimsical, only partially speaks to a young audience. Kimmel, author of the best-selling memoir for adults introduces an ugly stray searching for love. She's at her best when she imagines Orville's voice, which captures a child's sense of simplicity and exuberance. "Wouldn't it be nice just to jump right up on her," Orville thinks when he first spots Maybelle, his new owner-to-be, "but remembered the part about knocking people down and so he didn't." Orville can divine people's memories and desires from the way they smell. He sniffs Maybelle's hand and knows "her dearest wishes... To fly a little airplane. To lead a parade. To serve as the sheriff of a small town." Readers will hope that Herbert and Maybelle's farm may be the home Orville craves, but Herbert, over Maybelle's protests, chains the dog to the barn, where he howls and broods and thinks about "what an awful, lonesome life his had turned out to be." Parker's winsome portraits illuminate the story with intuition that rivals Orville's. The author at times overstates her case; much of the text turns on the unspoken dreams and buried hopes of adults. But children will cheer when Orville finds love across the street, and will appreciate his optimistic belief that "it would all work out somehow." Ages 5-8.