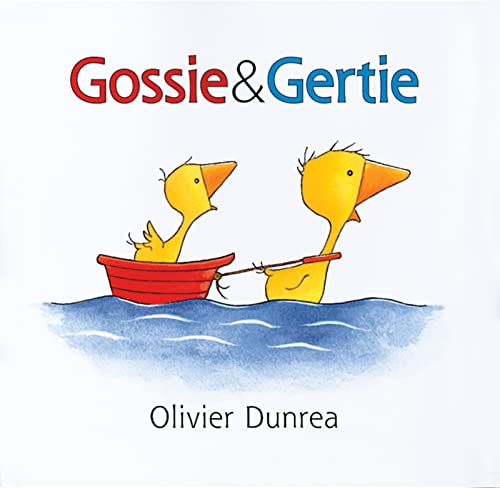 "This is Gossie. Gossie is a gosling," opens the first of Dunrea's hand-size square volumes starring two likable, diminutive characters. From the start, the author strikes an appealing, unorthodox note—Gossie is first seen only from the neck up, hanging upside-down from the top of the opening page—and this playfulness continues throughout both books. In the first, Gossie, who loves her red boots as much as Lilly loves her purple plastic purse, is distraught when her fancy footwear goes missing. After searching the farm high and low, she spots the boots: "They were walking. On someone else's feet!" Enter Gertie. " 'Great boots!' said Gertie. Gossie smiled." Gossie shares half of her prized possession with her new, slightly smaller pal, and the two walk side-by-side, each wearing one red boot. In the second story, Gertie has her own boots (a bright blue pair) and asserts her independence. In a sequence of perfectly timed illustrations, Dunrea depicts Gossie's mounting frustration—until, finally, she follows Gertie to the supper bowl they share. Adding ample wry humor to both his spare ink-and-watercolor pictures and minimalist text, Dunrea imbues both goslings with distinctive, endearing personalities and chronicles experiences every preschooler can recognize. Ages 2-5.