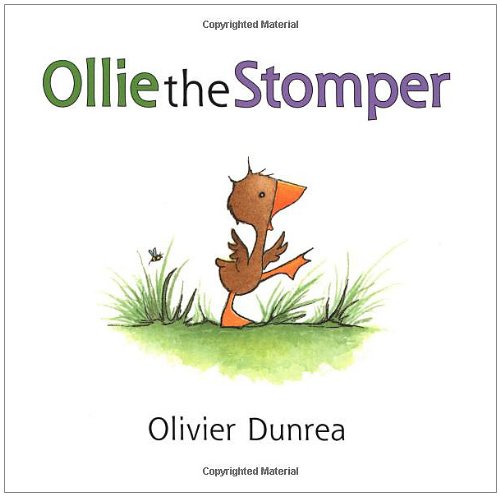 In this pair of winsome, small-format follow-ups to and , Dunrea introduces yet another endearing gosling—but the introduction takes some pleasantly paced time. Or rather, Ollie, whom Dunrea introduces in the first tale as an egg, takes time hatching, much to the chagrin of the impatient Gossie and Gertie. "This is Ollie./ Ollie is waiting." As the egg rolls to the left and rolls to the right, Ollie's stubborn voice from within the shell repeatedly and humorously insists, "I won't come out!"—a refrain that youngsters will eagerly echo. After chasing the rolling egg and even perching atop it, Gossie and Gertie offer some sage advice to Ollie ("Don't come out"), which of course triggers the much-anticipated hatching; Ollie, wearing a piece of the cracked eggshell on his head, pops up and announces "I'm out!" Fans of the books that introduced Gossie and Gertie will recognize the newcomer's behavior in the second story: he follows in his pals' tracks as they tromp, stomp, romp and jump, wearing their brightly colored rubber boots. When he shouts, "" Gossie gives him one of her red boots and Gertie hands over a blue boot. But Dunrea establishes Ollie as his own man when he adds a twist to the proceedings. With their simple watercolors and narrative, along with diminutive heroes who assert a budding independence, these tales demonstrate once again how well their creator knows his audience. Ages 2-5.