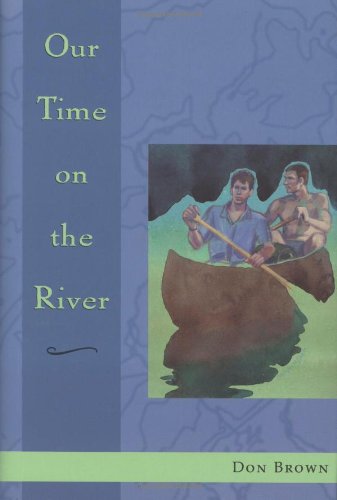 OUR TIME ON THE RIVER

In Brown's () brief, straightforward first novel set in the late 1960s, 14-year-old Steve and his older brother, David, canoe down the Susquehanna River at their father's insistence, shortly before David ships off to Vietnam. As they travel, they battle nature—rain and lightning, a fallen tree, raccoons ransacking their food supplies—and sometimes each other. They also encounter an array of people in the towns they pass, from a Dairy Queen owner who once rowed the river himself, to a carnie who recruits them for a day. Many of these strangers share their own war stories or their thoughts about Vietnam, and David gradually reveals his own complicated position ("Maybe trying to keep your ass from being blown away is smarter," David admits about draft dodgers). A run-in at a general store brings the Vietnam controversy sharply into focus, as WWII vets first subtly imply that their war was more important than David's, then physically intimidate the brothers. Even readers unfamiliar with the debate will be able to relate to Steve's difficult relationship with his brother (who often dismisses him as " 'bozo,' 'jerk,' or 'loser,' ") and will understand how much it means when the siblings' relationship deepens during their two-week trip. Some of the musings seem too scripted (e.g., "Vietnam didn't scare David, or so he said, but was he telling me the truth? Was he telling himself the truth?"), but overall, Brown paints a convincing picture of brotherly bonding and of a complex era. Ages 12-up.