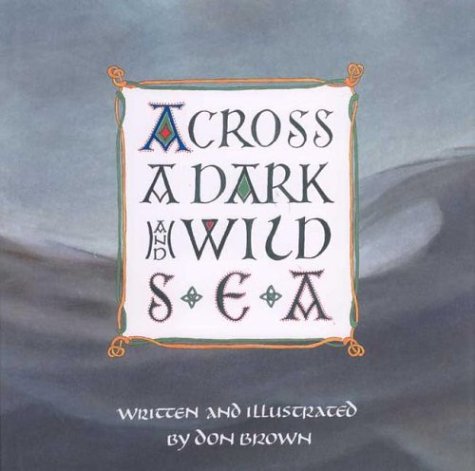 ACROSS A DARK AND WILD SEA

Brown's () lyrical narrative chronicles the life of Columcille, born to an Irish king in 521, and his passionate commitment to words and ideas. Though he grew up during the Dark Ages, when the new rulers of Ireland had virtually extinguished education ("Reading and writing were like magic, and the people who knew their secrets as rare as wizards"), Columcille from early childhood loved writing, which he mastered as a student in a monastery. He went on to become a monk as well as a skilled scribe and poet, and founded many monasteries. Brown laces historical facts with anecdotes from legends in his portrayal of this remarkable man, who exiled himself from his homeland after his kinsmen crushed the army of a High King, in defense of a manuscript. Columcille had painstakingly hand-lettered a Psalter (book of Psalms) and the king had ruled that the copy belonged to the owner of the original manuscript. In penitence for the bloodshed, Columcille decided to exile himself from his homeland, and ended up on the Scottish island of Iona, and there founded a monastery. He and the other resident scribes there devoted themselves to transcribing manuscripts, creating books that were then "dispatched, like small boats on a dark and wild sea, to places where reading and writing had been forgotten or ignored." Like the work of his subject, Brown's account also sheds light—on an intriguing individual of extraordinary accomplishment. The author's signature stark, muted watercolors seem especially well suited to this hero's life of piety and his historical setting. Ages 5-9.