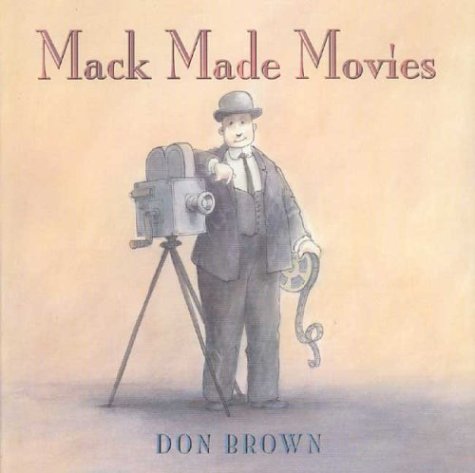 With the clipped, staccato delivery of a vaudeville act, Brown's () breezy narrative unspools the biography of Mack Sennett, who started out as the hindquarters of a horse and wound up the head of a major Hollywood studio. Born in Canada in 1880, Mack appeared onstage at the age of 20 in a two-person costume as "a horse's rear end. It was just a silly role in a foolish skit on a shabby Manhattan stage, but it was his stage debut and Mack dreamed of being a show business star." In search of greater acclaim, Mack went on to perform slapstick comedy in various cities but was often booed off the stage. When films grew in popularity, Mack learned the craft of moviemaking and headed to California, where he founded a studio and brought his slapstick skills to the screen: "Actors dangled from flagpoles, spilled down stairwells, floundered in floods." Sepia-toned illustrations composed like film stills demonstrate the examples and form a logical progression to Mack's creation of the Keystone Kops and his hiring of a little-known English comic named Charlie Chaplin. Sprinkling his narrative with quotations from Mack's autobiography (conveyed in thought balloons that mimic the silent screen), the author provides further insight into the personality of this creative, fearless fellow. Brown follows up a brief explanation of how nickelodeons operated with a flip book formed from the images of a tiny dog dancing in the lower right-hand corner of the pages. Readers will give this filmmaker—and Brown—well-deserved applause. Ages 5-9. (.)