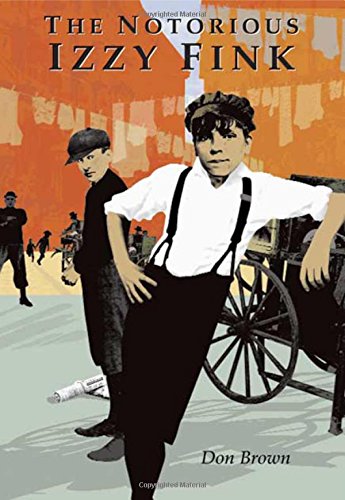 Brown returns to the world of his picture-book biography , deftly blending fact and fiction as he ushers readers onto the bustling streets of Manhattan's Lower East Side in the 1890s. Narrator Sam, whose Irish mother died trying to drag him away from a gang skirmish, works odd jobs to help support himself and his Jewish father, a tailor who has been deeply depressed since his wife's death. In a rather convoluted chain of events, Monk Eastman (a real-life gangster) recruits 13-year-old Sam and his thuggish archrival Izzy Fink, who heads up a gang of pickpockets, to sneak onto a cholera-infected ship anchored in New York harbor and fetch a prized racing pigeon with which Monk intends to compete. They pull off this feat, yet Monk comes after the boys when he discovers that the pigeon has a broken wing. Sam's run-ins with rival gang members, corrupt Tammany Hall politicians and crooked "coppers" add to the spice of the tale, which features crude street slang and ethnic slurs. (In an afterword, Brown notes that, in that era, such ethnic slurs "were freely used, reflecting the prejudicial stereotypes of the day.") Despite a few slow sequences and loose strands, the novel delivers a hard-hitting portrait of life on the streets in a turbulent time and introduces a host of credible characters—some sympathetic, others unsavory. Ages 11-14.