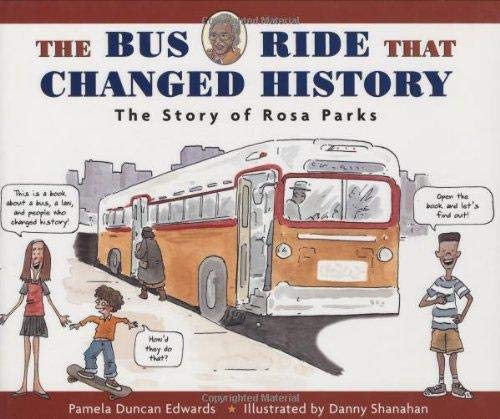 The Bus Ride That Changed History: The Story of Rosa Parks

This glancing treatment of Rosa Parks's 1955 refusal to give up her bus seat to a white man unwinds as a cumulative narrative reminiscent of "The House That Jack Built." The style, jarringly at odds with this historical event, comes off almost as a parody. After introducing the bus, the passengers, the white man in need of a seat and the bus driver in recurring phrases, Edwards ( ) finally focuses on Parks: "This is Rosa Parks, who said, 'No!' to/ the driver who told her to move for the white man/ left standing near the seats of black passengers riding/ the bus in Montgomery,/ where they enforced a law forbidding/ blacks to sit next to whites on buses,/ ." The sing-song text goes on to highlight the resultant bus boycott, the Supreme Court's ruling and its impact on the growing civil rights movement. Four contemporary youngsters appear in the margins whose dialogue (presented in speech balloons) ranges from informative to inane (e.g., "Look! That woman is refusing to get up. That's brave!"). Featuring muted hues, cartoonist Shanahan's ( ) mostly static cartoon art is as lackluster as the narrative. Ages 5-9.