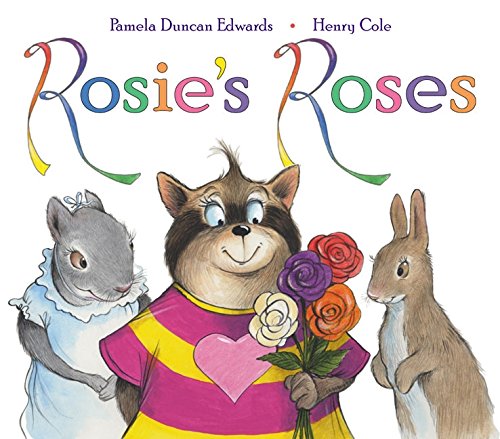 In another alliterative adventure, Edwards and Cole (previously paired for ) send winsome Rosie Raccoon on a mission: to deliver four roses, tied with a rainbow ribbon, to Aunt Ruth. One by one, the roses are carried off by other forest inhabitants. " 'Mrs. Robin's a rascal,' roared Rosie," reads a typical R-studded passage. " 'She'd better return my rose right away." But each time Rosie tracks down a missing rose, she ends up sympathizing with the thief's good intentions. Mrs. Robin, for example, gives the red rose to cheer up her husband, ravaged by "raging" strep throat. "You're my prize rose, Rosie," says Aunt Ruth upon learning of her niece's inadvertent largesse. The story lacks the sly wit of its predecessors, and the concept falters when the final rose recipient is a Miss Squirrel instead of another "R" animal. But Cole's watercolors have a cheery verve, and he embellishes his elegant portrayals of animal homes with soupçons of humor (Mrs. Robin has adorned her tree with frilly curtains). As in previous books, Cole hides the featured letter in every picture, a tried-and-true diversion. Novices in letter recognition should find this a rollicking read. Ages 3-6.