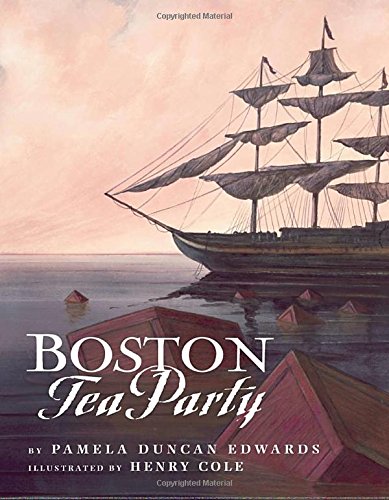 The creators of and travel back to 1773, when King George III's export tax on tea precipitated the Boston Tea Party. Ably targeting her audience, Edwards pares down the historical data. The narrative unspools in a singsong imitation of "The House That Jack Built," which plays up the irony of the king's tax on tea from India being sold to the colonies. The opening spread shows women in India picking tea leaves, followed soon after by a caricature of the king at teatime. Later, as outraged colonists read a notice of the new tax, the text incorporates the events thus far: "These are the colonists who cried, 'No!' to the king on his English throne who declared, 'Tax the tea!' that was made from the leaves that grew on a bush in a far-off land and became part of the Boston Tea Party." At the bottom of each spread, a bevy of chatty mice comment on the goings-on, offering supplementary information ("We're not going to take it! 'No taxation without representation!' ") as well as light asides ("Make sure you don't dump any cheese by mistake!"). Rendered in acrylic paints and colored pencils, Cole's lifelike paintings effectively evoke the period setting on both sides of the Atlantic. This early history lesson goes down easily, and will likely lead readers to find out more about this pivotal event in the formation of America. Ages 4-8.