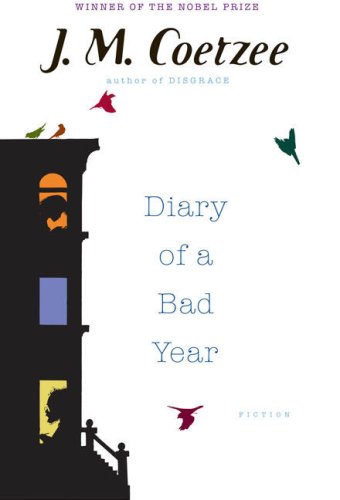 Diary of a Bad Year

Nobelist Coetzee's 19th book features a stand-in for himself: Señor C, a white 72-year-old South African writer living in Australia who has written . C falls into a “metaphysical” passion for his sexy 29-year-old Filipina neighbor, Anya, and quickly plots to spend more time with her by offering her a job as his typist. C's latest project is a series of political and philosophical essays, and Coetzee divides each page of the present novel in three: any given page features a bit of an essay (often its title and opening paragraph) at the top; C's POV in the middle; and Anya's voice at the bottom. C's opinions in the essays are mostly on the left (he despises Bush, Blair & Co., and is opposed to the Iraq War) and they bore Anya, who wants something less lofty. Meanwhile, Anya's lover, Alan—a smart, conservative 42-year-old investment consultant who's good in the sack, and who stands for everything C despises—becomes increasingly scornful and jealous, and eventually concocts an elaborate plan to defraud C. of money. Unfortunately, Anya is little more than a trophy to be disputed, and Alan as an unscrupulous, boorish reactionary is a caricature. While C's essays, especially the later ones inspired by Anya, hold some interest, this follow-up to is not one of Coetzee's major efforts.