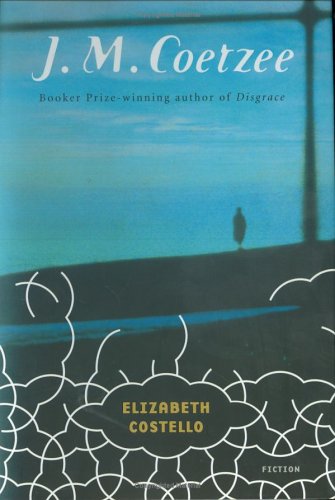 Even more uncompromising than usual, this latest novel by Coetzee (his first since 1999's Booker Prize–winning ) blurs the bounds of fiction and nonfiction while furthering the author's exploration of urgent moral and aesthetic questions. Elizabeth Costello, a fictional aging Australian novelist who gained fame for a -inspired novel in the 1960s, reveals the workings of her still-formidable mind in a series of formal addresses she either attends or delivers herself (an award acceptance speech, a lecture on a cruise ship, a graduation speech). This ingenious structure allows Coetzee to circle around his protagonist, revealing her preoccupations and contradictions—her relationships with her son, John, an academic, and her sister, Blanche, a missionary in Africa; her deep, almost fanatical concern with animal rights; her conflicted views on reason and realism; her grapplings with the human problems of sex and spirituality. The specters of the Holocaust and colonialism, of Greek mythology and Christian morality, and of Franz Kafka and the absurd haunt the novel, as Coetzee deftly weaves the intense contemplation of abstractions with the everyday life of an all-too-human body and mind. The struggle for self-expression comes to a wrenching climax when Elizabeth faces a final reckoning and finds herself at a loss for words. This is a novel of weighty ideas, concerned with what it means to be human and with the difficult and seductive task of making meaning. It is a resounding achievement by Coetzee and one that will linger with the reader long after its reverberating conclusion.

The Lives of Animals