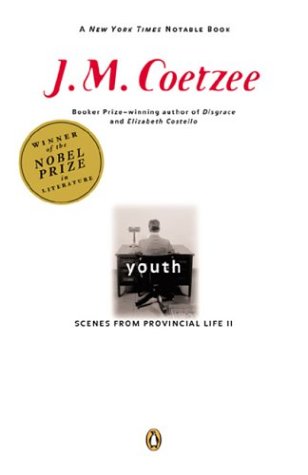 One need not have read , Coetzee's previous autobiographical account, to appreciate this sequel, as he continues to look back on his quest for identity and a yearned-for vocation as a poet. Written from a third-person, present-tense point of view, but intimately describing the inner life of "John," this slim memoir examines several years of Coetzee's expatriate life as he flees Cape Town in the 1960s to educate himself and pursue his destiny in London. It's a bleak time. A series of failed encounters—sexual and social—leave the emotionally immature protagonist feeling lonely and isolated. He wavers between pretentious defenses of his artistic purity and self-loathing assessments of his lack of talent and his unease as an outsider. A "soul-destroying" job as a computer programmer at IBM sucks away his peace of mind. Other attempts to do meaningful work and to establish personal relationships ensue, but the grand moment of definition never comes. John is waiting for romance or tragedy to strike so he can be "consumed… and remade," but he has only a flawed, naïve understanding of the world. Simultaneously miserable in London and convinced that South Africa is an accursed "wound within him," he rejects both as inimical to literature. Booker Prize winner Coetzee's () artistry allows him to write about his youthful self from the vantage point of adult knowledge while reflecting on his self-involved intellectual and social gaucheries with detached, wry humor. Though he fails to make his intense and awkward personality particularly appealing, Coetzee succeeds in defining the dilemma of the artist-as-a-young-man in sympathetic if angst-ridden terms that reflect the doubts of those who decide to devote their lives to literature without any idea of how they can make a meaningful contribution.