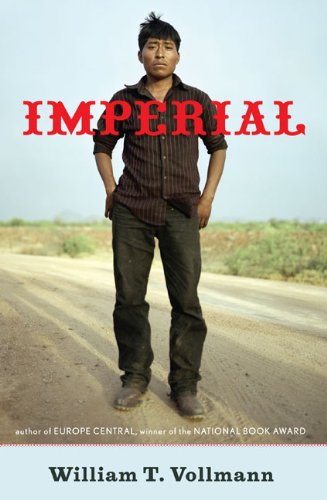 This is an exasperating, maddening, exhausting and inchorent book by the stunningly prolific Vollmann, who has really outdone himself. Eleven hundred pages plus endless endnotes about a single county in California is as perverse as Vollmann has dared be—which is saying a lot for a guy who has written a massive collection of tales about skinheads ( ), a seven-volume history of the settling of a measly continent ( ) and another seven volumes on the history of violence ( . But a big book about one county? Well, it's not just any county. Imperial is the southeastern-most county in California, bordering with Mexico to the south and Arizona to the east, across the Colorado River. Is it a place deserving of this seemingly disproportionate chronicle? Today, it is a hot spot for illegal immigration, law enforcement action, drug trafficking, prostitution and sweatshop labor in , fetid border factories. It is a place, sure enough, where imperialism has made its mark. Over the past centuries, a lot of bad things have happened in El Centro, as the region is also called, and very little good, as Vollmann's excessive data-dump demonstrates ad nauseam. The Spanish came, murdered, plundered, left; America annexed; land grabs ensued and Colorado River water was illegally diverted westward to render a temporary agricultural paradise and make a few fortunes. As with most of his books, Vollmann has performed mind-boggling feats of research, gobbling up obscure and arcane texts about the Spanish conquests, hydrography, citrus cultivation, immigration, poverty rates, desalinization, drug use, human smuggling and exploitation of the weak by the wealthy in all its guises as it applies to this benighted, once beautiful desert region. If Vollmann has a point of view here, an axe to grind, it is that he is appalled by the power inequities and the subsequent suffering of the Mexicans, and he is moved by the latter's simple desire to have a better life. But gouts of a bleeding heart make for some viscous prose, and, as seldom happens with Vollmann, his emotions overcome his cool and his positions fray into incoherence. Vollmann's normally reliable narrative voice veers between tour guide–speak and backpacking sociologist, with the occasional lyrical paean to a lady of the night. As a result, Imperial County is a place that few will have the stomach to visit, and a book few will be willing to read. (powerHouse is publishing a book of 200 photographs Vollmann took during the course of his research: $55 [200p] ISBN 978-1-57687-489-9.) Photos, maps.