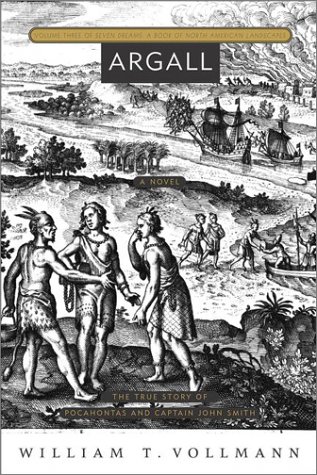 "Reader Right Honorable; I warn'd you that this Book of mine doth drag me down toward the worst," writes William the Blind, chronicler of this third "dream" of Vollman's projected seven-novel series. The settling of Jamestown, far from being a Disney movie fantasy, prefigured the genocide that was eventually to quell the "Salvage" resistance to the settlement of North America. Vollman's angle on the "romance" of Capt. John Smith and "Pokahuntas" is not pretty. Still, Vollman doesn't connive at rote political correctness, either. Inspired by John Smith's own , the novel is a vast fresco unfolding the encounter between the Virginia settlers and Powhatan's "People." Smith is "Sweet John," who like a good Elizabethan has taken Machiavelli as his guide to "Politick." His rise to brief eminence as the governor of the colony over the snobbish objections of the council is a tragicomedy of disappointed expectations, yet his policy of bringing war to the "People" has long-range consequences. When Vollman turns to the enigmatic Pokahuntas, he paints a portrait that is both respectful and moving, much different from the author's usual mannered sexual outrageousness. The eponymous Captain Argall edges into the foreground in the second part, succeeding Smith as Jamestown's leading spirit; he has the sinister bearing of some Jacobean theater devil—like Iago, there's menace in his meanings. He kidnaps Pokahuntas and manipulates her assimilation into settler culture. Vollman's ability to write in Smith's English and endow it with a contemporary snap is an extraordinary feat. For readers willing to undertake Vollman's somewhat forbidding oeuvre, this is the book to begin with.