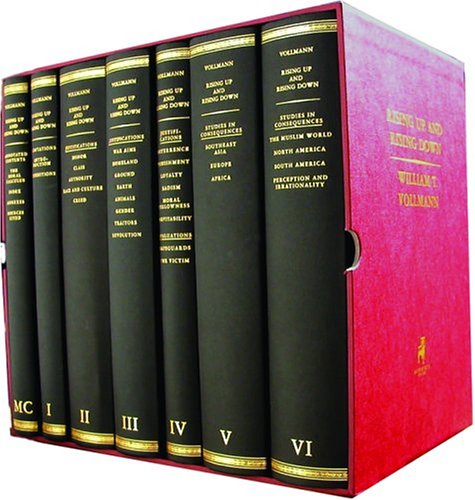 RISING UP AND RISING DOWN

This massive, unprecedented book, begun in the early '80s and mostly completed by 1998, is nothing less than "a critique of terrorist, defensive, military and police activity," along with an attempt to construct a moral calculus for the human use of violence. Focused on political violence—or force used to realign the ways in which power is distributed among and within groups and states—the book emerges out of several related questions that Vollmann (, etc.) answers with historical and ideological analysis, phenomenological and physical description, reportage and quotation: when do people use violence for political ends, how do they justify it and at what scale do they undertake it given differing situations and ideas about them? Although Vollmann does not deal with the events of September 11 or their aftermath, the book could not be more timely, and, within certain limits, it is almost as successful as it is ambitious.

The title refers to the rise and fall of states, empires, and militarized factions and groups. A "part-time journalist of armed politics," Vollmann is neither morbid ("I am not titillated by death") nor sentimental about means and ends. Yet he is also not quite a philosopher, historian (despite his Seven Dreams series of historical novels) or social scientist. The discussions of history and historical figures, which make up a great deal of the project, have a hard time competing with the contemporary interviews and photographs which are almost always gripping and immediate. As fans of his books on San Francisco skinheads, the Soviet invasion of Afghanistan and global prostitution will recognize, he is at his best when recording impressions of specific, unfamiliar situations and detailing the associations they trigger. His interviews (here including Taliban interior minister Abdul Razzak) are rendered with a dispassion that often matches that of .

In his quest for the complete set of human motivations for violence, Vollmann travels to an astonishing range of places and sifts a monumental number of texts. The work begins in the Paris catacombs, lined with human remains ("my 's like death's heads, my 's and 's like ribs, my 's 's, 's and 's like ball-ended humeri broken in half"), and ends with an intense reportorial treatment of discrimination against the Buraku people in Japan—with the final volume "extracting" an actual moral calculus from the preceding six. In between, Vollmann tallies places, figures, organizations and writings including Aquinas; an Afghani woman named Anjillah; the Amazon Antiope; an Aryan Nations pamphlet; the group known as Black Organizing Power; the 19th-century U.S. Bureau of Land Management; Cicero; Columbine; the Democratic Republic of Congo; Gandhi; "General X" of the Khmer Rouge; Idrimi, king of the ancient Mideastern city of Alalakh; Lenin; Leonidas, king of Sparta; the northern magnetic pole; Montezuma; Robespierre; Saddam City; Zagreb—and many, many other figures and locales.

In its length, this project equals Winston Churchill's somewhat similarly themed . Conceptually, a better comparison is Burton's , though the present book is about three times as long, and violence has almost certainly directly killed many more people than melancholia. The photos work similarly to those in James Agee and Walker Evans's . Proust's treatment of memory in also makes sense as a comparison, but the people and places number far fewer there.

Some will object that Vollmann's analyses and syntheses are not sufficiently systematic, but what keeps this book from full-on greatness is that it does not create a style or sensibility that is shocking in and of itself, and that finally holds its unwieldly contents together. Rather, at its best, its rigorous, novelistic, imaginative, sonorous prose treats a fundamental topic on a grand (and horrific) scale. And that is enough, since the book is designed to get ordinary people thinking about the role violence, even at a distance, plays in their lives, and what part even bystanders play in the world's calculus. Given the price of this slipcased edition, however, many will have to reserve it at the library.