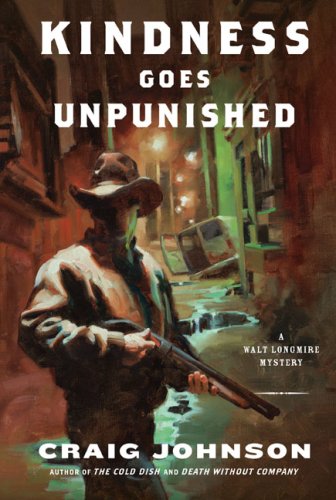 In Johnson's appealing third Walt Longmire mystery (after 2006's \t\t ), the Wyoming sheriff \t\t is drawn into a messy situation in the City of Brotherly Love when his daughter \t\t Cady's ex-boyfriend is killed a few days after Longmire accuses him of being \t\t behind the assault that left Cady, a Philadelphia lawyer, comatose. Longmire's \t\t deputy, Victoria Moretti, soon arrives on the scene as her family of Philly \t\t cops tries to decide whether to suspect Longmire of murder or ask his help with \t\t the investigation. Everyone in the cast appears to be a stereotype of some \t\t sortâ€”the Italian police clan, the Salvadoran drug dealer, the Irish publican \t\t and Longmire's eternally wise and mystical Cheyenne friend, Henry Standing \t\t Bearâ€”but Johnson plays it for the right kind of laughs. When someone \t\t introduces Henry as Longmire's "Native American sidekick," Longmire ripostes \t\t that it's the other way around. The quick pace and tangled web of \t\t interconnected crimes will keep readers turning pages.