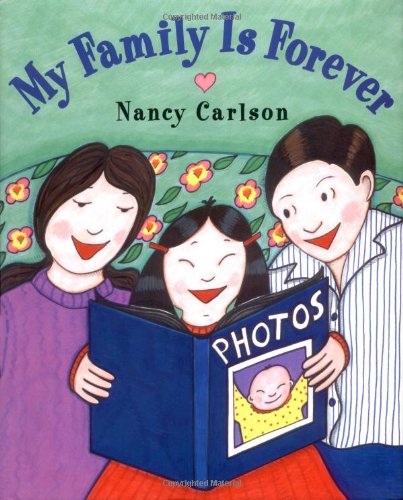 MY FAMILY IS FOREVER

With candor and heartfelt pictures, Carlson (the Harriet series) looks at the world through the eyes of an Asian girl who was adopted as an infant by Caucasian parents. "Families are formed in different ways, so they don't always look alike," the narrator explains, as a beach scene depicts diverse families frolicking in the waves. Carlson devotes the first part of the book to the girl's adoption story: how her parents "really wanted a child to love" (Carlson shows the couple jogging in the park and wistfully looking over their shoulders at a happy family of four), connected with an agency, and flew to a "far away" country to get the baby. "And from the moments they held me in their arms," the girl says, "my parents knew we would be a family forever." The book's boldly outlined, brightly hued portrayals of family life never quite shake an instructional feel, however, and some readers may be troubled by Carlson's well-meaning rendering of her heroine. None of the characters are drawn with great subtlety, but the girl's Asian features border on stereotypical, and her spunkiness can seem relentless. Still, the upbeat, confident tone of the straightforward prose, and the occasional age-appropriate jest (the girl admits once telling a friend she came to America "on a spaceship, just like superhero") mitigates the book's occasional didacticism. Audiences looking for a loud-and-clear message that love, not looks, defines a family should find that Carlson delivers. Ages 3-up.