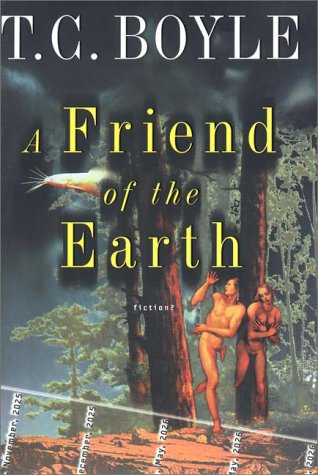 A Friend of the Earth

Mordantly funny and inventive, this take-no-prisoners novel revolves around a few of Boyle's favorite themes: obsessive hygiene, compulsive consumerism, uneasiness in the natural world and fear of technology. As the Vonnegutishly named Tyrone ""Ty"" O'Shaughnessy Tierwater reminds readers, ""to be a friend of the earth you have to be an enemy of the people."" In the year 2025, Ty is 75, by contemporary standards a young-old man, and zookeeper for a private menagerie in Santa Ynez, Calif. Most mammals are extinct, and the environment as 20th-century humans knew it is destroyed. Besieged by floods, drought and Force 8 winds, people tramp through pestilential mud, eat farm-grown catfish and drink rice wine. In flashbacks from the frenetic 21st-century sections to Ty's past as a rabid environmentalist in the late '80s and early '90s, Boyle choreographs a syncopated dance, riffing on the mores and manias of environmental crusaders. To prove a point in their early campaign, Ty and wife Andrea spend 30 days naked and unprovisioned in the wilderness, emerging triumphant. But otherwise, Ty is subjected to a lifelong series of humiliations, and his forthrightness about them makes him sympathetic, while eco-warriors in general are skewered as relentlessly as the bulldozer-driven corporations. A bad time is had by all, most notably by Ty's daughter, the tree-sitting Sierra, who, unlike Julia Butterfly Hill (the real-life tree-sitter who surely influenced Boyle), does not descend from her perch to publishing contracts and public radio interviews. Boyle (The Tortilla Curtain) allows for a hint of redemption in the end, but his depiction of the cruel fate of humankind--the fate of monkey wrenchers, lumber companies, the not-quite-engaged and the engaged, too--is as unflinching as it is satirical. Major ad/promo; first serial to Outside magazine; 8-city author tour. (Aug.)
close
Details