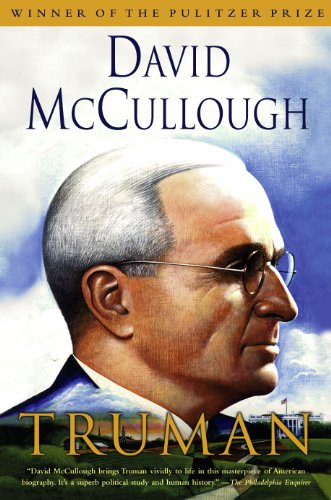 Cracker-barrel plain in speech and looks, this seemingly ordinary man turned out to be one of our most dynamic presidents. It was Harry S. Truman who ordered the atomic bomb dropped, halted Communists in Turkey and Greece, initiated the Marshall Plan, NATO and the Berlin Airlift, ordered desegregation of the armed forces, established the CIA and the Defense Department, committed U.S. forces to Korea and upheld the principle of civilian control over the military by firing Gen. Douglas MacArthur. McCullough ( Mornings on Horseback ) has written a surefooted, highly satisfying biography of the 33rd president, one that not only conveys in rich detail Truman's accomplishments as a politician and statesman, but also reveals the character and personality of this constantly-surprising man--as schoolboy, farmer, soldier, merchant, county judge, senator, vice president and chief executive. The book relates how Truman (1884-1972) overcame the stigma of business failure and debt (as well as the accusation that he was ``bellboy'' to Kansas City's Pendergast machine) and acquired a reputation for honesty, reliability and common sense. McCullough pays considerable attention to Truman's family, especially his fervent and touching courtship of Bess Wallace, the idolized love of his life. Her mother never felt Truman was good enough for her daughter, even after he became president. The book's re-creation of the 1948 presidential campaign, during which Newsweek 's poll of 50 political writers predicted that the incumbent would lose the election to Thomas Dewey, is the most complete account of that surprise victory to date. The book is an impressive tribute to a man whose brisk cheerfulness and self-confidence were combined with a God-fearing humility; a great and good man who, in McCullough's opinion, was a great president. Photos not seen by PW. BOMC main selection; History Book Club and QPB alternatives; author tour. (June)
close
Details