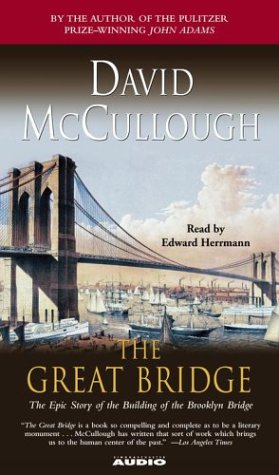 THE GREAT BRIDGE: The Epic Story of the Building of the Brooklyn Bridge

This outstanding audio adaptation brings to life the Herculean struggles behind the creation of one of this country's most recognizable and enduring landmarks. Herrmann's rich, expressive voice perfectly complements McCullough's stately language, and the combination of their talents—coupled with the impressiveness of the engineering marvel that is the Brooklyn Bridge—makes this a compulsive listen. Subtle changes in Herrmann's tone clearly set off quotations without interrupting the flow, and though this audiobook is abridged, the deleted segments are briefly summarized by an unobtrusive second narrator so that listeners never feel as if they're missing part of the story. While there are some descriptions of the 13-year construction process that would have benefited from illustrations, the production as a whole is superb. Listeners cannot help being moved by the grandeur of the structure and by the spectacular risks taken by the men who worked on it, particularly chief engineer Washington Roebling, who remained the driving force behind the bridge despite being crippled by the bends and bedridden for many years. Drama of every kind can be found here: political scandals, intense rivalries, extreme loyalty, a charming love story, heroism, spectacular near-disasters, death, illness and war. Once called the eighth wonder of the world, the Brooklyn Bridge still inspires artists and photographers, tourists and natives alike, and it is the only stone-towered, steel-cabled bridge in the world. In this excellent production, listeners will be inspired anew.