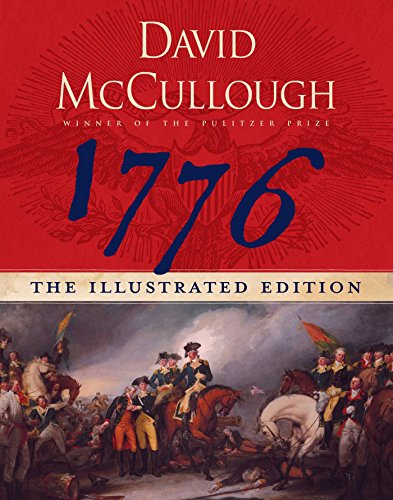 This handsome new version of McCullough's blockbuster (2.6 million copies of the original edition in print) is a visual feast. The text is abridged, but McCullough illustrates his riveting account of “the most important year in the war that made America” with maps, portraits and reproductions of broadsides and newspaper ads. Many famous paintings are included— (which, McCullough notes, captures the drama of the moment, even though many of the details are inaccurate); Charles Wilson Peale's portraits of Alexander Hamilton and Gen. Nathanael Greene; John Singleton Copley's portrait of Mercy Otis Warren, who wrote an early history of the revolution. McCullough also introduces less well-known images, such as a satiric print poking fun at the British prime minister, Lord North. Scattered throughout are vellum envelopes that hold facsimile reproductions of 37 primary sources—letters from George Washington to Martha, an ambrotype of Continental soldier Ralph Farnham as a centenarian, the text of a vow of allegiance to the king taken by Loyalists in New Jersey. By including these documents, McCullough has recreated not just the excitement of 1776, but the thrill of an archival research trip as well. From start to finish, this volume is a delight.