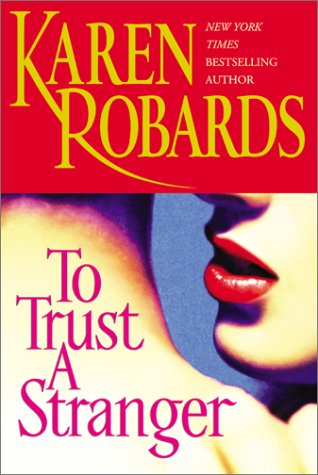 TO TRUST A STRANGER

The usual ingredients bubble and boil in Robards's latest romantic suspense thriller. Julie Carlson, once a poor girl from the wrong side of the tracks but now the beautiful owner of a successful boutique in Charleston, S.C., seems to have it all. As the novel begins, however, a hit man circles her suburban mansion: Julie's rich husband, Sid, has hired thugs to kill her. Unaware of the danger she is in but convinced that Sid is cheating on her, Julie slips out of the house just in time and follows her husband to the red-light district, where she serendipitously—and literally—runs into private detective Mac McQuarry, dressed up in drag to spy on a client's husband. Julie isn't sure whether she should trust a man in a dress, but she has no one else to turn to, and soon she and Mac are working together to get the goods on Julie's crooked husband. As it happens, Mac holds a personal grudge against Sid, a prominent builder in Charleston, because Sid was involved in the disappearance of Mac's half-brother 15 years before, and then got Mac kicked off the police force when Mac tried to prove it. Robards's fans will enjoy the machinations before Julie and Mac get together, though clichés clutter every page ("The truth hit him like a hammer over the head: He had a galloping case of the hots for his newest client, who was not incidentally his oldest enemy's wife"). Of course, true love solves past mysteries, while hot kisses get as much play as life-threatening confrontations. A bodice ripper at heart, the novel is the equivalent of a box of junk candy.