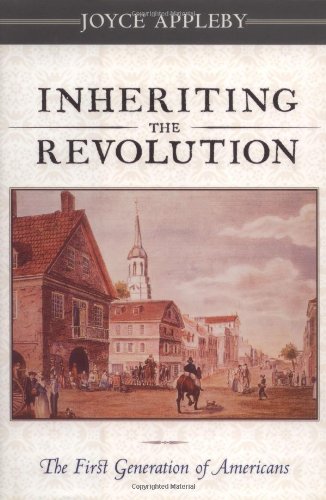 Inheriting the Revolution: The First Generation of Americans

An esteemed historian of early America, Appleby (UCLA) has written a social history of ""the first generation of Americans""--not those who fought the American Revolution but, as her title indicates, those who inherited it, who had to figure out just what their parents' bold declarations of liberty looked like on the ground. Appleby's lens is wide: she investigates religion, business, family life and politics, examining this generation's struggles with slavery, their musings on the proper role of women and their participation in evangelical revivals. One of the more innovative discussions comes in the chapter ""Careers,"" in which Appleby argues that those who came of age after the revolution often earned their daily bread doing tasks their parents could not have imagined. Many continued to farm, of course, but others headed to cities to run businesses, teach school, preach sermons, build buildings, publish books. Indeed, Appleby notes that in the Revolutionary era, the term ""career"" ""denote[d] a horse-racing course""; it was only after 1800 that it was used to describe the trajectory of a person's vocation. Appleby strains to pay attention to the South, but her book betrays a certain Northern bias--her focus on the development of capitalism and the incursion of the market better describe the industrializing North than the slaveholding South, which, in historian Eugene Genovese's phrase, was in the market, but not of it. But that is a small quibble with a wonderful book, which freshly conveys the energy and creativity unleashed in a generation forging a new national identity. (Apr.)
close
Details