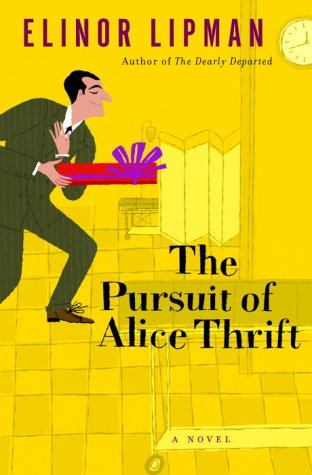 THE PURSUIT OF ALICE THRIFT

Snappy wit, a clever plot and the sheer fun of a book you can't put down await readers of Lipman's () eighth novel, surely her best to date. The eponymous Alice is a sleep-deprived surgical intern at a Boston hospital. A graduate of MIT and Harvard and a congenital workaholic, she's also devoid of social skills, a sense of humor or elementary tact. Though miserably unequipped with self-esteem, Alice is an intelligent, well-brought-up offspring of upper-middle-class parents. Why, then, does she fall prey to the romantic blandishments of Ray Russo, a vulgar loudmouth and con artist who—it turns out—lies every time he opens his mouth? That Lipman can make this story plausible, and tell it with humor, psychological insight and rising suspense, is a triumph. Despite her roommate Leo's description of Ray as " a slimeball who won't take no for an answer," Alice fails to see through her conniving beau because she's achingly lonely and because he remains devoted when she's put on probation for falling asleep while assisting in the OR. It's easy for her to dismiss the concern of family and friends as simple snobbery—which, in some cases, it is. Lipman's knowledge of hospital routine, especially the bone-weary lives of interns and residents, is a major reason that the plot moves along as smoothly as if on ball bearings. The dozen or so supporting characters, from Alice's horrified parents to her good friends and fellow residents, are vividly three-dimensional. Lipman's eye for social pretense has never been so keen—or so cruel. There's a dark moral here—that class differences cannot be breached—but readers will appreciate the candor.