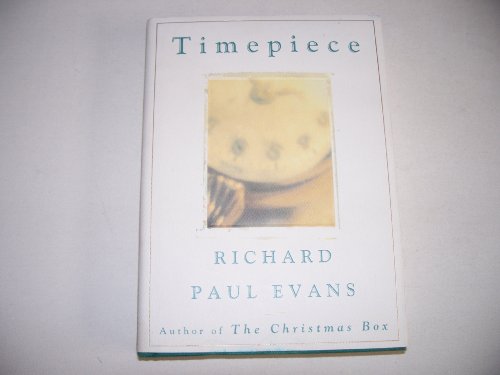 Like the titular treasure chest of Evans's bestselling The Christmas Box, the eponymous timepiece--""a beautiful rose-gold wristwatch""--of this heart-plucking prequel fairly vibrates with sentimentality. Readers of the former novel will recall how the author met aged widow MaryAnne Parkin and learned of her deceased husband, David, a successful businessman, and how their infant daughter, Andrea, died a tragic death. Here, Evans traces events some 80-odd years back to tell this family's story, but not before recalling the eve of his own daughter's wedding, in 1967, when he presents her with the wristwatch, given to him by MaryAnne. Fragments of David Parkin's diary, dated 1908-1918 and set in Salt Lake City, weave evocatively throughout the author's account of the Parkins' courtship, marriage and family tragedy. At the thematic center of the tale lies the timepiece, bequeathed by a wealthy widow to David's friend Lawrence Flake, a black man who repairs clocks. Events force Lawrence to kill another in self-defense; fearing for his friend, David tells police that he fired the shot, and is exonerated. In revenge, the dead man's friends set a fatal fire at the Parkin house and steal the symbolic timepiece, which will come back to the Parkins only after an extraordinary act of kindness and forgiveness by MaryAnne. Evans has a more ambitious tale to tell here than in The Christmas Box, and he generally carries it off with aplomb, though the dark events of the central story and an unabashedly sappy wedding-eve coda don't quite mesh. The nation's supply of Kleenex is bound to deplete after this hits the bookstore shelves. 500,000 first printing; simultaneous Spanish, large print and audio editions; author tour. (Apr.)
close
Details