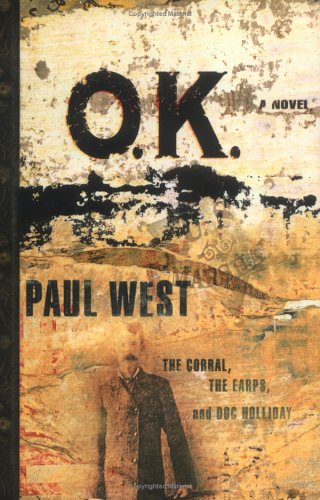 Ok: The Corral the Earps and Doc Holliday a Novel

West (The Tent of Orange Mist; My Mother's Music), a prolific writer and adventurous stylist, squeezes Doc Holliday dry in a meticulously researched but overworked historical novel. The basic story is familiar. On his way from Georgia to the healthier climate of Colorado, consumptive dentist Dr. John Henry Holliday visits Dallas, East Las Vegas and Dodge, gradually abandoning dentistry as he discovers his prowess as a gunfighter and his Keatsian obsession with death. Along the way, he saves the life of Wyatt Earp, marshal and gunman. The two become fast friends and eventually land in Tombstone, Ariz., where they take part in the almost mythical 1881 gunfight between the Clanton Gang and the Earp family at the O.K. Corral. In the confusion following the shoot-out, which West describes in a perfunctory shorthand, Doc abandons Earp and spends his dying days in Colorado, a melancholic figure both feared and respected as a gunslinger. Favoring character over action, and Doc's character over anybody else's, West's depictions of Doc's sometime lover Big Nose Kate, the Clanton Gang, Wyatt Earp and even the vast western landscape are threadbare foils erected to highlight Doc's already magnified traits. In lengthy, cantilevered sentences, the writer reveals Doc's thoughts on cigar smoking or the use of ""if"" in conditional sentences, often in the form of letters to Doc's cousin Mattie, a cerebral cloistered nun who gropes toward her spiritual enlightenment just as Doc gropes toward his in the desert, using violence and his worsening health as vehicles of redemption. West's acrobatic prose--laden here with Latin clich s, such phrases as ""the ogive windows of identity,"" and puns (""doxology/Doc's Ology"")--is more hindrance than help, and, in this strained tale, only Doc emerges as anything more than a cipher. (Apr.)
close
Details