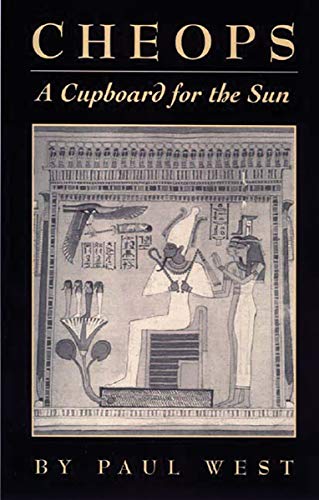 CHEOPS: A Cupboard for the Sun

West () examines the legacy of the Egyptian leader who built the great pyramids in his latest historical novel, a vividly imagined but flawed book that begins with the once-powerful Cheops fighting a series of grave illnesses. Decadent palace intrigue ensues as various relatives and factions try to capitalize on his impending death. The proceedings are wryly narrated by Osiris, the god of the underworld, who provides observations and commentary on the imminent downfall of the great leader. West also offers some other perspectives on the action, including that of Cheops's mother-in-law, Merytyetes, and his poetically inclined daughter, Princess Heduanna. Cheops's troubles come to a head when his late wife's body is stolen from her tomb, and the abduction is followed by two murders. The first involves a key palace figure, while the second strikes down Cheops's son, Ka-Wab. The novel turns hallucinatory and downright bizarre in the final section, as West imagines a link between the music of 19th-century English composer Frederic Delius and the burial plans of Cheops. The historical detail is impeccable, and Osiris proves to be a capable guide through Cheops's final days, despite some ponderous prose and a few decidedly modern interpretations of the leader's dilemma. But while West deserves credit for his formidable imagination, the final section of the novel is so erratic that it overshadows and dilutes the power of the earlier material.