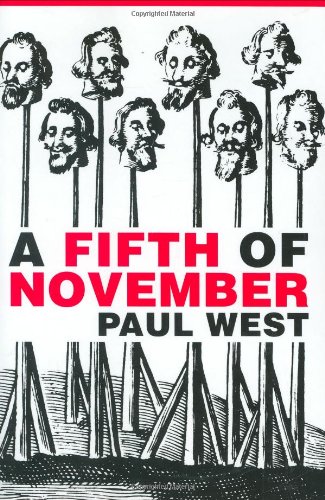 A FIFTH OF NOVEMBER

West's latest novel strips away the touristy quaintness surrounding the English customs of Guy Fawkes Day (November 5) to reveal persecution, malice and a very modern paranoid style beneath the cause for the merriment. Guy, or "Guido," Fawkes was captured in a cellar beneath the Parliament building in 1605, where he had stored barrels of gunpowder in order to blow up the next session of Parliament. Robert Cecil, King James's powerful spymaster, a crippled, Machiavellian figure, had Fawkes tortured into confessing the details of a conspiracy, mounted by certain "recusants"—outcast English Catholics. West's central figure is Father Henry Garnet, the fugitive head of the Jesuits in England. The novel's fugal structure gains a rich melancholy from our awareness of Garnet's inevitable capture and execution. Anne Vaux, a devout, feisty Catholic noblewoman, is Garnet's protector. She has Little John Owen, a "lame and stunted" carpenter, devise "priestholes" in her houses to hide priests from Protestant vigilantes. West's story is like one of Owen's trompe l'oeil concealments: full of misdirections. In the middle of it, though, is a conspiracy and a flight, which West unfolds like some odd combination of Jim Bishop and Ford Madox Ford. His novel shows that history is a web of meanings in which human beings are tragically caught, not the usual historical novelist's dollhouse of period detail.