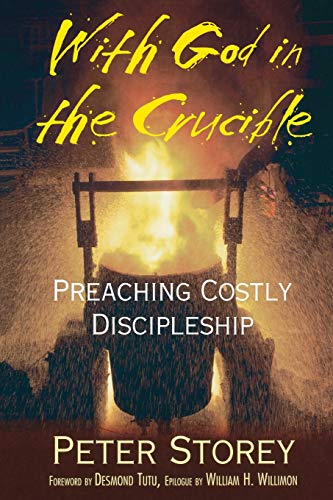 WITH GOD IN THE CRUCIBLE: Preaching Costly Discipleship

This anthology of sermons and addresses delivered by Storey, professor of Christian ministry at Duke Divinity School, is no ordinary sermon collection. Instead, it is Storey's words over nearly 30 of the most intense years of the anti-apartheid struggle, when he played a crucial role as, among other things, president of the Methodist Church of Southern Africa, president of the South African Council of Churches and prison chaplain to Nelson Mandela. Storey's discourses offer more than an inside look at a crucial period (1966 to 1992, roughly the same period covered by South Africa's Truth and Reconciliation Commission). In an era where terrorism and the "war on terror" leave us hungry for deeper truths, Storey speaks with the prophetic authority of apartheid's darkest, most violent days. "We need to care while caring is still possible," he says to a half-empty church the Sunday after the Soweto riots where the South African police gunned down marching school children. While this book will be a rich resource for ministers and study groups, its compelling ethical voice invites anyone interested in the anti-apartheid struggle, social justice, or models of leadership for challenging times. An introduction and footnotes guide the reader who is unfamiliar with the historical and political context of apartheid.