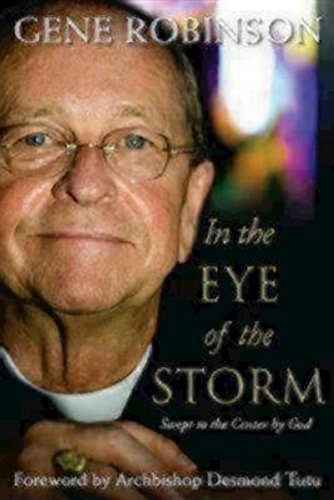 In the Eye of the Storm: Swept to the Center by God

In this meandering but charming book, Robinson, the controversial gay Episcopal bishop of New Hampshire, addresses sexuality and theology. He argues that the cause for which the planets “seem to be aligned” today is full civil rights of GLBT people. Many of the arguments he rehearses are familiar: the church today faces a struggle similar to the civil rights movement of the 1960s; the way we think about sexual orientation today was unknown in biblical times; and so forth. More original is Robinson's discussion of the vulnerability of sex, and his support for abstinence outside of committed relationships, because sex in other contexts is likely to hurt people. But this book goes beyond sex to Christian theology. Robinson reviews his beliefs in the Incarnation and in forgiveness. He insists that the God he knows is a God of radical inclusion, who wants to lift up the oppressed, including women, minorities and the poor. That good news, Robinson admits, actually makes him somewhat uncomfortable, since he knows that he is among the world's most privileged people. Sometimes Robinson's prose is a bit florid, but his passion will draw in many mainline Protestant readers.